October 28th, 2015. Fort Davis, TX. We drove over the Emery Pass today. 8,000 feet. There were no guard rails. There were shear drops on every turn. Narrow roads. 360 degree switchbacks. The sort of thing that makes a pile of rocks sound appealing by comparison.

Have I mentioned that I’m an ordained minister in the Church Of The Latter Day Dude? I have abided over the nuptials of several couples. Amongst them, our daughter and son-in-law Corey. When Lisa told me they are planning on getting married I asked when the blessed event was going to take place. Corey was in the Marines and Lisa said, we think Corey can get leave in 10 days. 10 days? So we had 10 days to organize a wedding that we wouldn’t be sure would be taking place until a few days beforehand.
.
At the time Lisa was the manager of a coffeeshop. One of her customers owned a funeral home in a huge Victorian mansion that he offered for the ceremony. There was a small chapel with chairs on each side that he used for the viewings that could be used for the wedding. We put a semi circle of small pillars with flowers on top in the front of the chapel because the chapel was fronted by an insert that was awfully, well, coffin shaped.  There was a big sign outside the building that read “Funeral Home.” A sign was made about the wedding and stuck up to cover the “eral” part of “Funeral Home” sign. So that if you didn’t know the actual purpose of the building the sign just read “Fun Home.” 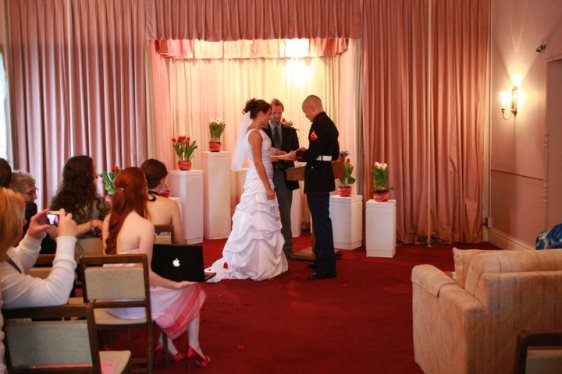 One of my work colleagues (the one saving me a seat next to Marie Osmond in the hereafter) is a cake maker extraordinaire and she made the cake. Our youngest daughter Sophia was in band in high school and four of her friends formed a string quartet just to play for the service. To the best of my knowledge this was their only gig. Our good friend Jon owns a photography studio and donated his time to shoot all the pictures. And as I mentioned I conducted the service. I asked Lisa if there was anything specific she wanted me to include in the service. Her only instructions: “Dad, just don’t drop the f-bomb and please get our names right.” Such confidence.
.
We had the reception back at our house. Anyone who asked to help we gave an aluminium baking tray with a bunch of ingredients and cooking instructions to bake something for the reception. Lisa bought her own wedding dress and Corey wore his Marine dress blues. I think the wedding cost us about $600. 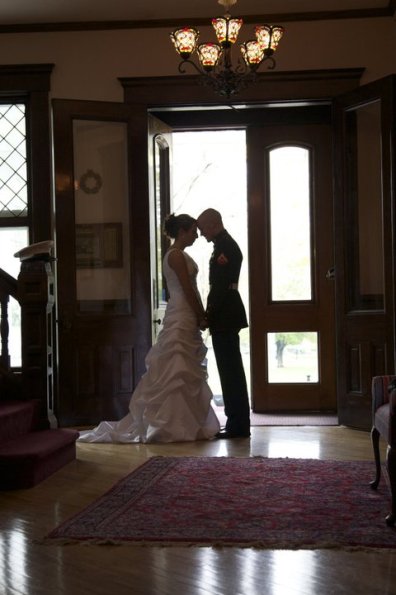 Before I would marry a couple we would all meet to make sure of mutual compatibility. For my part I would ask them one question. Do you love this person for who they are and not for who you think they can become? I don’t ask for an answer then and there, it’s just something I want the couple to think about. And I guess I’m asking this question more of the women than the men. The problem is that men don’t change. We think we do. We think we make all these concessions but we don’t. We might rearrange our priorities but with the idea of getting the same end result, not actually changing things. We are not stubborn. We are not pigheaded. We are just who we are. We are the men you fell in love with. I’m not saying men are totally incapable of change but waiting for it to happen is akin to watching a glacier melt (global warming not withstanding). You get involved in a relationship for who the person is. Not what you one day think they will become. To do otherwise is to court disappointment. I can’t change who I am. Even after the fall I’m trying to figure out how to get back on a bike to complete this ride. I have no business doing so for more reasons than I care to count. But that part of my brain has no off switch. I can’t help it. No matter how much it hurts to move I can’t stop planning. I will continue to mend for now, while everyone out there rides the miles I can not. I am humbled by the over whelming enthusiasm from friends, family and strangers from all over the world. But I have to finish what we started. Even if it’s just the last part in Florida. Maybe I need a three wheeler that is low to the ground. Maybe I need a bike like the Pathfinder Mars Lander that is surrounded by airbags so I can slam into any surface at high velocity and just bounce. Maybe I need a lobotomy.

I dropped my cell phone today. Sadly there’s nothing unusual about that. But I mention it because I was able to pick it up again. All by myself. I haven’t been able to pick anything up from the floor since the accident. Rae is cheering me on when I breathe into the incentive spirometer with the same enthusiasm that she had previously reserved for cheering us as we rode by on our bikes. Yes, I’m a very lucky man. I know.
.
If my recovery continues at this rate I hope to be up and falling back over again in no time at all.
.
Peace, love and midwives
.
Ray