Skip to content
HomeTo Live And Ride With ALS

We had been at the neuroscience clinic undergoing tests for about 3 hours. My wife (also Rae) and I had been trying to get used to the idea that I might have ALS for just a few short weeks. And today we ran out of other things to rule out. After the neurologist left the room a nurse and social worker entered with a book of resources and started talking about such practical issues as local caregiver support groups and renting wheelchairs. I think that was the moment it finally hit Rae. A few tears rolled down her cheeks as the nurse guided us through what was available but she maintained her composure throughout. Sure there were second and third opinions in our future but unfortunately ALS is quite efficient at providing its own second opinion. We walked home in silence that sunny but cold December day, both lost in our own thoughts. Then about halfway home Rae turned to me and said “promise me you’ll never give up.”

Sometimes you need to be careful what you ask for.

I think we diagnosed the disease fairly early in the process. Although who knows how long your body and brain compensate and deny respectively before you can no longer ignore the fact that the buckets of Ibuprofen you’re throwing at it aren’t helping. I’ve heard of people undergoing years of tests and referrals before finally arriving at a diagnosis of ALS. If I had to think about it there were subtle changes in my voice early last summer but I could ignore that. However it was exactly a year ago that I began to have difficulty playing guitar and that I couldn’t ignore. Not that I was ever going to be the next Jimmy Page but it was a form of relaxation for me and playing Yellow Submarine kept my newborn grandson Jack happy. Today I can barely raise my left arm high enough to reach the guitar neck. This shit doesn’t mess around. There is only one finger on my left hand I have any control over. With a superhuman effort of willpower (and extensive tongue chewing) I can extend my middle finger about half way but enough to get the point across. This is one of many ironies of the disease. 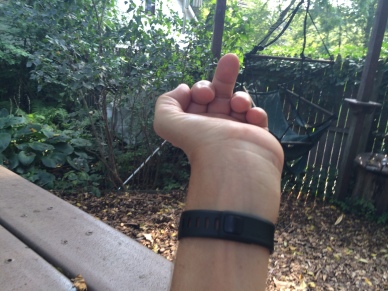 I would say, “ALS, this is for you,” but for some strange reason I kind of admire its purity. For all our knowledge of the human body we know next to nothing about this. There is no cure, no treatment, no way to predict how it will affect any given individual. That admiration may change as symptoms progress. But that leads me to one of the purposes of this blog. There isn’t really much out there about the effect of ALS on cycling or visa versa. It was the first thing I checked on when the neurologist said I could have the disease. Well actually, now that I think about it, that was the second thing. The first was to check Wikipedia to see if there was a special type of “Ray Spooner ALS” that was somehow different from that other type of ALS that had been in the news so much of late. But alas, no.  The one thing I found about cycling was Doug Schneebeck’s ALS Blog: “Biting Back on the Bike.”  This has practically been my bible over the last eight months.

But if I can add to that body of knowledge, it might help someone. I understand that the disease affects everyone differently. I understand as an N of one, my research has limited broader application. But the process is as much a part of the journey as the destination.

First the good news. In February my pulmonary function test results were 122% of predicted value for someone of my height, age, wt etc. Six months later they are 116% of predicted value. All this cycling shit has to be good for something. Was thinking of having a celebratory cigarette. 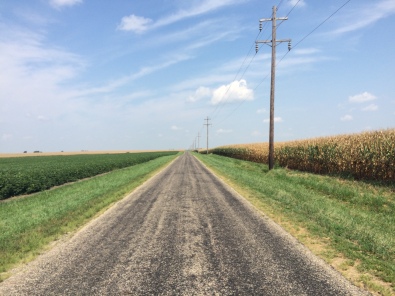 This is what 99% of the road around here looks like. Yet I still managed to fall off my bike yesterday. Hey, I’m talented. What can I say. But holding onto the handlebars is an issue. And don’t get me started on braking. I need to fix these problems before we hit the mountains in California. We have an appointment with a prosthetic maker next week. I’ll let you know how it goes.

Whether we have a diagnosis or not, there is a number to our days. The problems that we are going to face won’t change, but we can change how we face them. Because that’s ultimately who we are. Not a product of the challenges placed before us but a product of how we have faced those challenges.

This is how we chose to face this challenge.

21 thoughts on “To Live And Ride With ALS”

Ride Update: After much consideration, we have decided not to host the R4R this year. As many of you probably already know, I (Clifton Channell) have had some fairly serious health problems this year, including a recent surgery to remove thyroid cancer. Because of this, I feel that I will not be up to the physical demands of hosting the event. The thought of letting everyone down made this a more difficult decision, especially after canceling last year’s ride due to Covid. If I’m not 100 percent, then I can’t give the R4R 100 percent, and you all deserve a great event. I will be focusing on my health and continuing to recover and hopefully getting back on the bike before the first snow! If you have already registered, we will be offering a couple of options. You can choose to receive a refund for the registration fee, we can hold your registration for next year, or you may choose to donate your registration fee to ALS research.
Registration is open! Link is in bio and on our website. Please consider creating a fundraiser page when you signup to help us reach our goal of 10k for ALS research #als #endals #cycling #fondo #champaignillinois #justride #r4r2022
Loading Comments...
%d bloggers like this: