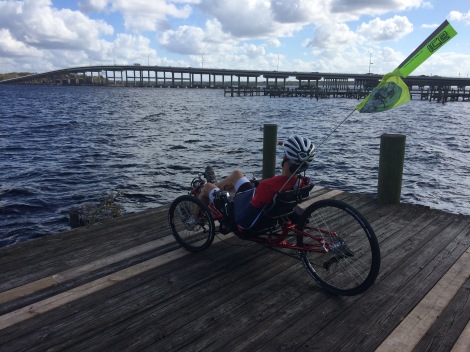 November 17, 2015. Palatka, Florida. As we near our goal I feel compelled to switch from Eastern time to Leonard time. After our first visit at Easy Street Recumbents Micah set about detailing the modifications that would be needed in order for me to be able to safely ride and operate the trike. That evening he sent us an email attachment of the itemized invoice. There were nineteen suggested options/modifications. The title of the attachment was “The Spoonermobile.” Images immediately came to mind of me riding around wearing a mask with a cape billowing behind in the breeze. When I clicked on the attachment there was a picture of the trike under the banner “Your Chosen Configuration.” When it hurts so much to move that you flinch when someone walks too close to you it’s hard to imagine what it will be like to be pain free. Three weeks ago it took two people to help me out of bed. Yesterday I rode a trike 82 miles.

–“You Got Me Singing”

I can still operate the gear shifters and brake levers with my right hand without too much trouble. Holding the steering steady above 30 mph can be dicey but doable if I don’t put too much power into the pedal stroke. Other things are getting harder though. Brushing my teeth, holding a mug by the handle, opening doors. My voice is already pretty much shot. And I would love to be able to finish a meal before it was stone cold. All that aside, unless something else gets me first I am going to die of respiratory failure at some point. But when you are told you may have ALS you don’t really think of any of that. It’s hard to conceptualize not being able to eat, breath or talk. There are many struggles that lie ahead but the thing that hits the hardest is the knowledge that one day soon someone other than me is going to be wiping my arse.

I may have mentioned (once or twice) that I’m a nurse. And as such so are many of my friends. Many of them, bless their hearts, have said they wouldn’t have a problem taking care of that particular function for me. As honored as I am at the multitude of offers the problem is that I’m a private pooper. I try to wait till everyone has left in the morning before going. I know where all the really out of the way bathrooms are in the hospital. If I’d had a stroke on the pot it would’ve been days before they found the body. Fortunately modern technology has given us some alternate options. There is a device that sits on the toilet seat that with the push of a button can take care of that “Necessity Care Function.” Granted, someone will have to push the button. Not to mention help me on and off the toilet. But hey, who wouldn’t want to pamper themselves with a gentle, warm aerated stream on “turbo” setting.

There are many mental adjustments that come with riding a trike after a lifetime of riding a two wheeler. Each time I sit on the bike I want to reflexively reach for the seat belt. Then there is the extra width that comes with having two wheels in the front. I keep leaning to the right laboring under the misapprehension that this will somehow make me narrower but alas the trike remains the same width.  And trust me, I never lean to the right in any matter. I have always admired riders who can come to a halt and balance in place without falling. But hey, guess what. I can do that now. In fact, that’s one of the best things about the trike, when I come to a stop I don’t have to get off. I can have a drink, check my phone, take a nap. The possibilities are endless. I have also spent a lot of time pondering my visibility as semi truck wheels fly by just a few feet from my head. In order to increase visibility I now have my own official freak flag.

When I first considered buying a trike, first and foremost was the worry that no one would talk to me when I got home. I mean, three wheels! The last time I rode something with three wheels was probably 50 years ago. But my future is going to be a clinic in adjusting to regression. Soon I’ll need a sippy cup to drink from, a drape to keep me clean while eating. And did I mention that I won’t be able to wipe my arse?  That being said, after the first day I felt like I’d been riding a recumbent forever. It didn’t take long to adjust. If I can get used to something so different from my ingrained frame of reference in this short a time I think I can adjust to anything. Maybe even sharing the bathroom. In a totally unrelated bonus, Rae and her business partner own a chocolate retail store called “The Bent Bean.” She loves tooling around on the Spoonermobile after I’m done for the day. Recumbent riders are collectively known as “Bent Riders.” To be honest, that alone was reason enough to get the trike.

On the 19th, if all goes according to plan we will be at the Atlantic coast. We shipped my bike home to make room in the car but kept the front wheel with us. I dipped the back wheel in the Pacific and I’ll dip the front in the Atlantic. It’s not exactly how I imagined the event would transpire but does anything in life ever work out like you imagine? You adjust and move forward. Or sometimes backward or to the side. But hopefully over time, there is forward motion. Even if that involves getting used to going backward.

So I guess you’re wondering when I’m going to get to the meaning of life. As you can imagine, to even think about taking this journey I would have to spend a fair amount of time in the saddle. And you’d be right. Back home I generally don’t ride with anyone. I just commune with the corn. Riding is my moving meditation. But I do believe that over the course of my decades in the saddle I have come to understand the meaning of life. And I was wondering if, by way of thank you for all the support and encouragement, would you mind if I shared it with you all today?

Now, I should emphasize, this is not information that should be sought lightly. While it may be divine in its simplicity, it can be transformative if you accept it as your credo. If you’re in a relationship and both of you like to ride and one of you takes this information to his or her heart and the other does not, it has the potential to lead to great disharmony. So I’m going to give you one last chance to stop reading.

Still with me? Ok, here it is:

If you’re stationary, you’re not moving. 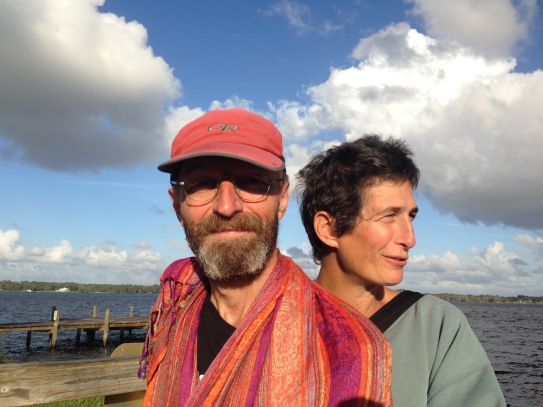 16 thoughts on “The Meaning Of Life”

Hi R4R fans! Sorry we haven’t posted in a while. Been really busy riding my bikes, washing my hands, wearing my mask, and avoiding places. Just wanted to let you all know we’re still here and we hope you’re all doing well and staying safe. Hoping for a big ride next June!! #endals #staysafe #keepgoing and #justride
Thanks for everyone that came out to support the R4R and the fight against #ALS
Loading Comments...
Comment
×
<span>%d</span> bloggers like this: