Another perspective on events of October 22, 2015 from a guest author.

I had never realized before how intimate you become with someone when you ride thousands of miles on bicycles with them.  Sure, when you go out on the local group ride or circuit race, you shop around the group to try and find a nice steady wheel to follow and keep near the front and hope Old Man Trouble doesn’t come to find you.  You pay vague attention to the rider, maybe what team he’s on and how big or small he is and that’s about it.  If that little romance doesn’t pan out you just go looking around the group for another steady wheel to follow.  When you are riding with one other person in a two man pace line for mile after mile after mile, hopefully across an entire country, something else happens.

You get used to your partner’s pedaling cadence and the subtle signs that they are getting tired.  You stare at their calf muscles for hour upon hour and can almost see the fatigue setting in, just as you can see their shoulders start to rock from side to side and their stolen glances down at their pedals become more frequent.  When the person you are riding with also has ALS, you get to know every asymmetry of their body.  The way their left shoulder drops down and the bunched muscles of their right shoulder pull up on the opposite side to compensate and support 90% of their weight and provide all of the control over their bike.  You see the slight difference in pressure on the pedals between left and right leg and a host of other signs and symptoms that you never noticed before.  When the ALS has progressed to the point that their left arm has become all but useless, you can also see the difficulty they have with maintaining their grip on the handlebars over even the slightest of bumps and the tenseness in their body as they try to deal with heavy stop-and-go traffic.  They are also unable to give the flick of the elbow that is the universal sign for the man behind to pull through and take a turn doing some work at the front.  Most of us that ride a bike in a group take this simple gesture for granted, but perhaps we shouldn’t, because with one roll of the dice it could so easily be us struggling to overcome all these obstacles.  After a couple of days, we settled on a slight pause in his pedaling stroke to indicate it was time for me to do some work.  We never talked about it, that just became the default signal for me to stop being lazy and help out at the sharp end.
.
That’s what I mean when I talk about intimate.  Ray Spooner and I are very different people with very different backgrounds that were brought together by our love of cycling, but once you put us on bikes together, I can pretty much tell you what he is thinking at any given time and I am sure he would tell you the same.  I know when he’s pissed off, hungry, exhausted, content or enjoying pulling a massive turn at the front at 25mph just like he was 21 again and everything in between.  The problem is, this shared connection makes it all the more difficult to cope when Old Man Trouble does come to find you.  When I heard Ray shout something along the lines of “whoa, whoa” on the bike path in Phoenix, AZ, in my heart I already knew he was going down.  That had happened a couple of times on the trip already without too much damage to man or machine, although every time I worried that he was going to hurt himself.  This time my head snapped around and I knew right away it was going to be a hard fall.  Both Ray’s wheels were up against a 6 inch curb and there was a large pile of jagged rocks quickly approaching.  There was very little even an able bodied rider would have been able to do to save that situation and Ray’s left arm was just a dead weight pulling him into the curb.  I watched him get airborne, go partially over the bars, flip sideways and land heavily into the rocks.  There was no roll, no sliding, just instant deceleration to zero.  By the time Ray landed, I had already unclipped and laid my bike down.  Rays left  arm was bent under him at an impossible angle and given the fact that Ray rarely even winces let alone comments on pain, I knew the from the moans that we were looking at a trip to the hospital. 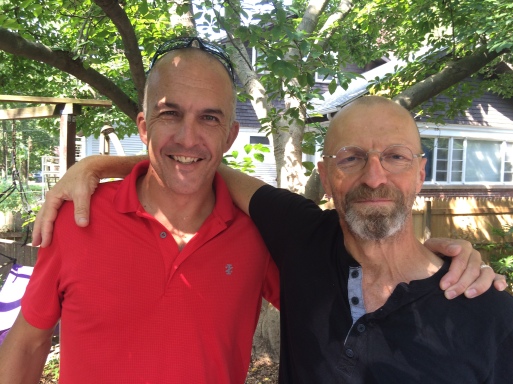 I went to visit Ray in Urbana about a month ago and posted a picture on Facebook of the two of us.  I had titled it “Mates” but someone else had added a comment saying “Wheelmen” and I think that captures it perfectly.  It is almost impossibly hard to watch your wheelman take such a savage fall and know that there is nothing you can do about it, just like it is impossibly hard to know there is nothing you can do about the ALS ravaging his body.  Our little cycling fellowship has been broken for now, but I don’t think I know of a more tenacious man than Ray Spooner, so I have a funny feeling you might not have heard the very last ride from these wheelmen just yet. 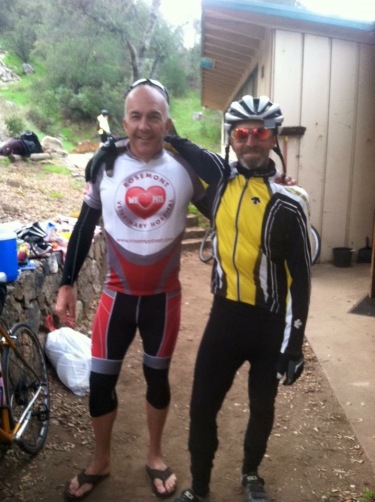 Ride Update: After much consideration, we have decided not to host the R4R this year. As many of you probably already know, I (Clifton Channell) have had some fairly serious health problems this year, including a recent surgery to remove thyroid cancer. Because of this, I feel that I will not be up to the physical demands of hosting the event. The thought of letting everyone down made this a more difficult decision, especially after canceling last year’s ride due to Covid. If I’m not 100 percent, then I can’t give the R4R 100 percent, and you all deserve a great event. I will be focusing on my health and continuing to recover and hopefully getting back on the bike before the first snow! If you have already registered, we will be offering a couple of options. You can choose to receive a refund for the registration fee, we can hold your registration for next year, or you may choose to donate your registration fee to ALS research.
Registration is open! Link is in bio and on our website. Please consider creating a fundraiser page when you signup to help us reach our goal of 10k for ALS research #als #endals #cycling #fondo #champaignillinois #justride #r4r2022
Loading Comments...
%d bloggers like this: